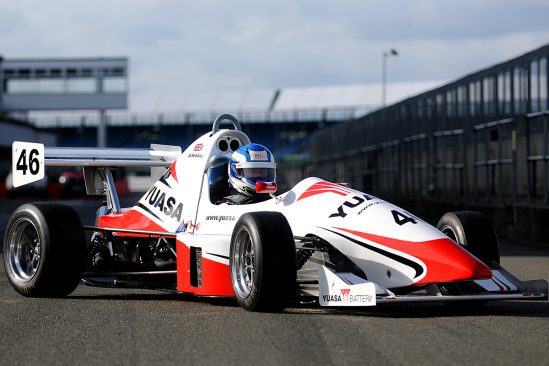 Yuasa, the world’s leading battery manufacturer, has unveiled a brand new eye-catching race car livery for its 2016 BRSCC Formula Jedi Championship driver Bradley Hobday. The scheme, which features Yuasa’s iconic white, red and black design, was seen for the first time at a testing day at Silverstone on Friday 19 February.

Competing in his first ever single seater racing season, 29-year-old rookie Bradley Hobday will contest this year’s national BRSCC Formula Jedi Championship having enjoyed phenomenal success in 2015. Not only did Bradley dominate last year’s British Sprint Championship, winning 9 titles, but he also won his class in every event in which he competed.

This year will be the first time Bradley has competed in wheel-to-wheel racing on track. He will need to learn quickly, the 14 round Jedi championship is seen as the UK’s premier bike-engined, single-seater category and has been a proving ground for many top motorsport stars over the years. The closely fought series is notoriously competitive and held across Britain’s top racing circuits over 7 weekend events.

This is now the second season in which Bradley has enjoyed Yuasa’ support and will be the first year the battery manufacturer has been his main sponsor. To mark this, Bradley’s 1000cc Jedi car, which does 0-60mph in just 3 seconds, will carry a stunning all-over design based on the classic Honda Yuasa Racing British Touring Car Championship (BTCC) livery so well known amongst motorsport fans worldwide.

“My new car looks absolutely fantastic, I am proud to be carrying the iconic Yuasa livery and will do my best to make sure it will be seen right at the front of the pack. Thanks to Yuasa I not only have a car that will stand out on track, but also the valuable support of the world’s leading battery manufacturer.” 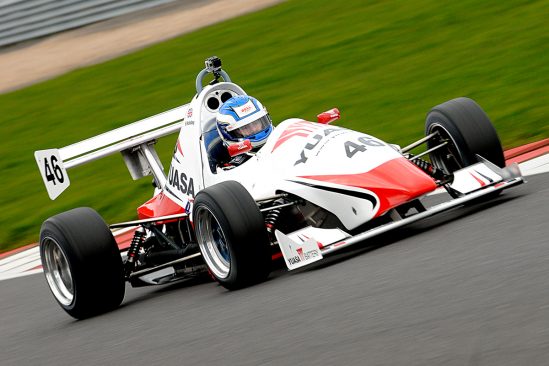 “Today’s test session went really well, obviously we still have work to do to make sure we are in the best possible shape for the start of the season. As this is my first season of circuit racing, I have a lot to learn. I am well up for the challenge and confident that before long I will fight my way to the front of the field and secure some really strong results.”
Yuasa has a long and proud heritage in motorsport and has enjoyed phenomenal success on track in recent years. The battery manufacturer sponsors MotoGP’s Repsol Honda team and has been title sponsor of Honda Yuasa Racing in the BTCC since 2012. Last year winning the BTCC driver’s crown with Gordon Shedden and an unprecedented 5th manufacturer’s title.

James Douglas, Marketing Executive at Yuasa Battery Sales (UK) Ltd said: “Last year Bradley’s amazing dominant achievements really demonstrated our own core values of performance, reliability and quality. After such a successful season, naturally we were eager to carry on supporting Bradley as he takes his next step up the motorsport ladder into Formula Jedi.

“We are delighted with the new design of Bradley’s car, and feel it does our iconic Yuasa motorsport livery proud. Its launch marks an exciting new chapter in Yuasa motorsport and will complement our partnership with Team Dynamics in the BTCC and Repsol Honda in MotoGP.

“As the world’s leading battery manufacturer our motorsport sponsorship is a valuable asset as it allows us maintain and increase our brand profile amongst fans. With another exciting and successful year in prospect, we are excited and looking forward to what Bradley can achieve for us in the 2016 BRSCC Formula Jedi Championship.”

Over the next few weeks Bradley and his team will continue to test their car ahead of the season opener at Snetterton on 2 April. The championship then heads off around the country visiting the top circuits including Silverstone, Brands Hatch and Donington Park. 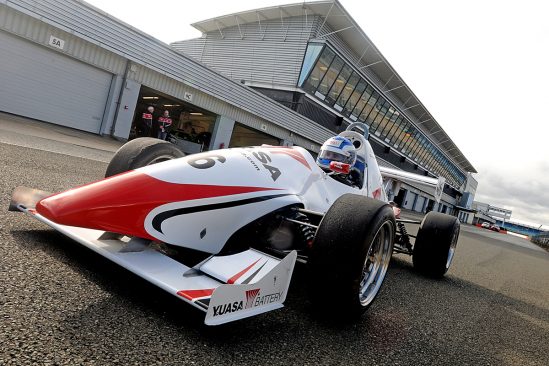