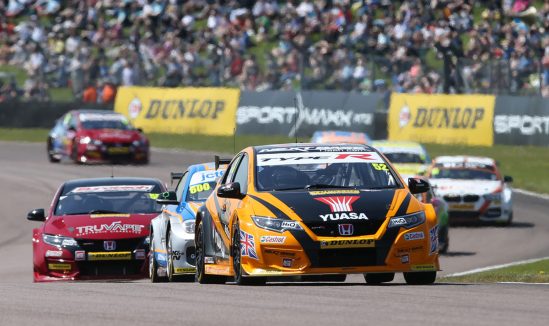 Matt Neal kept himself and Halfords Yuasa Racing at the top of the Dunlop MSA British Touring Car Championship title standings with a fourth podium finish of the 2016 campaign at the end of a rollercoaster weekend at super-fast Thruxton.

After qualifying a tremendous third on maximum success ballast – only narrowly missing out in an enthralling scrap for pole position – Neal rapidly moved to the front of the field in a chaotic curtain-raiser.

The three-time champion later suffered a puncture as he exited the final chicane, damaging his steering and sending cars darting left and right in attempted avoidance. Team-mate Gordon Shedden was collected in the melee, having climbed into the top six from 11th on the grid. 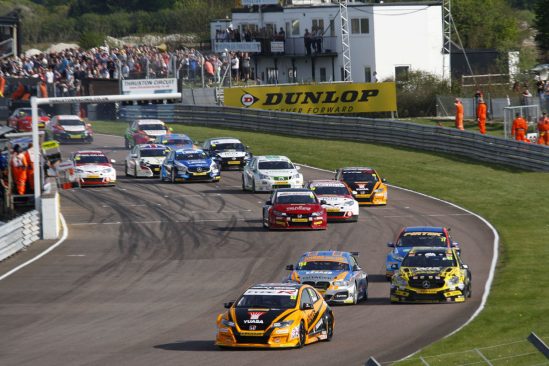 The race was red-flagged and the Halfords Yuasa Racing crew set swiftly to work to repair the two battered cars. Their heroic effort was richly repaid as Shedden stormed through the order from 23rd on the grid in a shortened second encounter, demonstrating the prowess of the Honda Civic Type R and proving just why he is the reigning champion by pinching fourth position on the last lap.

‘Walking wounded’ Neal wound up 11th, before both drivers starred in race three. By dint of staying out of trouble and stealthily picking up places, Neal capped his weekend on a positive note with the runner-up spoils to retain the championship lead – very nearly snatching victory at the chequered flag. 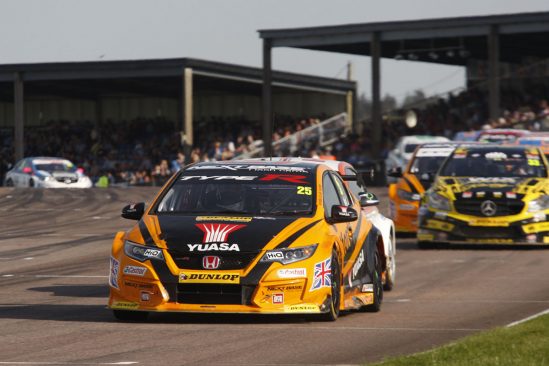 Shedden was challenging for second when he found himself sent sideways by a tag from a BMW, and after regaining lost ground, he was then struck by a second BMW on the run down to the final chicane, spelling a premature end to his race. Heading next to Oulton Park on 4/5 June, Neal tops the Drivers’ table with Shedden in fifth. Halfords Yuasa Racing continues to lead the Teams’ Classification, with Honda second in the Manufacturers’ chase. 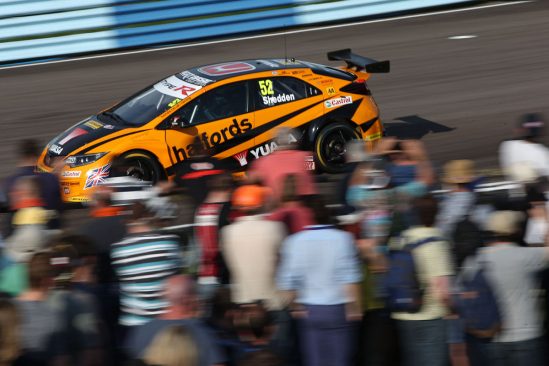 “It was certainly good to finish on a high – it makes the journey home a lot more enjoyable – although in truth, it was a weekend that had promised so much more and I was staring down the barrel of a gun until the last race! Thruxton has always been a Honda circuit, and we proved that again with the ballast on-board in qualifying. I was surprised by just how strong we were carrying so much weight in race one and the puncture was nobody’s fault – I was being super careful over the kerbs and the car was running like a dream. The Halfords Yuasa Racing boys did a stellar job to get us out again for race two in the nick of time – they had to deal with not just one but two cars in a million pieces – and then I was able to open the Civic Type R up again in race three and was flying at the end. I would never have thought I’d leave here still leading the championship after the first two races, so all’s well that ends well, as they say.” 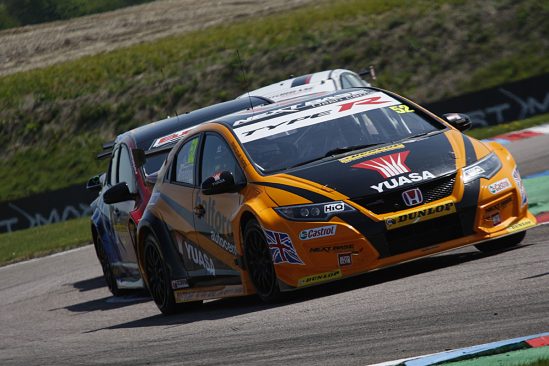 “It’s been a mixed weekend. What happened in race one was so unfortunate – simply wrong place, wrong time – but the Halfords Yuasa Racing team put in a monumental effort to repair both cars so quickly and to fight back the way we did in race two was mega. The Honda Civic Type R was incredible, and to make up almost 20 places was a real result – if the race had run to its original length, we could probably have finished on the podium. I felt like a bit of a BMW pinball in race three, and being taken out through no fault of my own was a hugely disappointing way to finish the weekend – particularly when the car was so strong and we were in the mix for another rostrum, which would have kept us towards the top of the standings. Still, at least it means we’ll go to Oulton Park with less ballast, so the key will be to capitalise on that.”