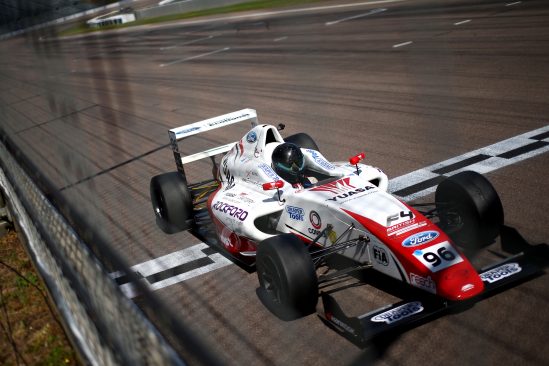 Jersey driver Jack Butel was back in action in the F4 British Championship at Rockingham last weekend (27/28 August). Butel returned to racing after missing Knockhill to claim three solid race results with a 12th, 16th and 17th in the fiercely competitive Ford EcoBoost powered series despite suffering from continued engine problems.

Rounds 22, 23 and 24 of the FIA certified series was to be staged at Rockingham in Northamptonshire. The circuit is one with two characteristics with an ultra-fast, high-speed banked straight leading into a banked curve for turn one. From there a tight and technical infield offers great overtaking opportunities before the cars re-join the American style oval to complete a 1.94 mile lap around the speed-bowl. Drastically changing conditions over the weekend meant Jack and the JHR Developments team struggled to find the optimum set-up for the demanding Corby venue. After a short qualifying session, Jack notched up 17th on the grid for race one.

Lining up ahead of the first race that afternoon, the St Saviour resident was hoping to break back into the points in the torrential rain, a condition the 20-year-old thrives in. As the lights went out, Butel made his trademark start, picking up positions on lap one. Making great progress in the wet conditions, the Yuasa-backed driver had made his way into the top 10 and was challenging for a points paying position by lap seven. Disaster was to strike the Channel Islander as a spin in the wet conditions resulted in damage to his F4 single-seater. Maturely, Butel brought the car into the pits for the team to make repairs but sadly went two laps down as the team carried out their work. Jack re-joined the race to shakedown the car and make sure he was happy for the following days action with 17th the end result at the fall of the flag.

The rain of Saturday had made way for a day of sunshine on Sunday as thousands of spectators took their place in the grandstands while hundreds of thousands tuned into live coverage of the race meeting on ITV4. 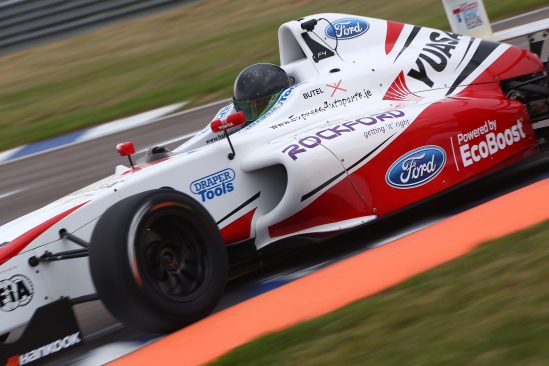 The second British F4 contest was going to be a sleeves rolled up affair for Butel as he was to get stuck into the thick of the action. After another good start, the young-gun flew around the 1.94 mile Northampton layout in his Ford EcoBoost powered single-seater picking off places as the race went on. In the closing stages of the race Butel was in a train of cars jostling for position, going wheel-to-wheel – all vying for a lucrative top-ten result. With the field being so competitive from front to back, Butel revelled in the action and gave full commitment and at the fall of the flag the Jersey-born driver claimed 12th after an action-packed contest, leaving Jack slightly disappointed not to take home more championship points.

The final race of the weekend was to be a quiet affair in comparison to the previous races. With his head held high, Butel couldn’t make the same progress as shown in the previous race in his JHR Developments turbo-charged missile which was down on power, chalking up 16th as the clock counted down to zero.

Rocking around the Rock – Quote from the Rockingham Weekend

“It was good to be in action after missing Knockhill. It was to be another mixed weekend as we had a few flashes of speed but an error by me in race one and engine troubles throughout the weekend dented my progress.

“ I love the wet normally and I was running well – fighting in the top 10. Coming out of Gracelands corner I made a mistake as I hit the white line on the edge of the track, which is like ice when wet and the car spun and hit the wall. I managed to get it back and the team did a great job for me to get the car back out and shake it down for the rest of the weekend.

‘”Race two was the best of the weekend as we were flying despite our engine woes. We pressed on as much as we could and 12th was a good result but I felt we could have been in the top 10 scoring points had it not been for the lack of power. 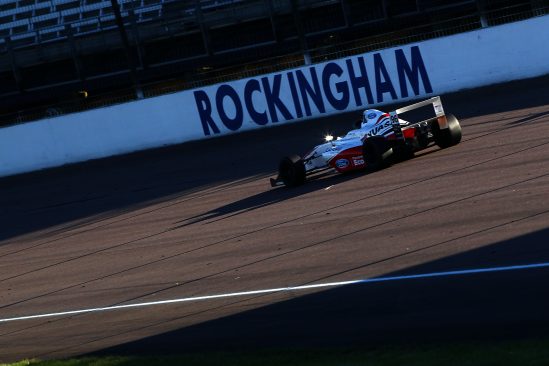 “The final race was difficult as whenever I went to overtake someone the car wouldn’t have enough straight line speed to slipstream anyone, so had to try and fight hard for position. The engine will be looked at before Silverstone and hopefully that will remove any gremlins we have suffered in the last few rounds.

“I am looking forward to Silverstone as we recorded sixth there last year. This year I am fitter and more experienced and know the car a lot better so I am going to push as hard as I can to get some points next time out.”

The Northamptonshire double-header will conclude next time out at Silverstone for rounds 25, 26 and 27 where Jack Butel will be back in British F4 action on September 17/18. The JHR Developments driver will once again look to take another top-ten at the home of British Motorsport.