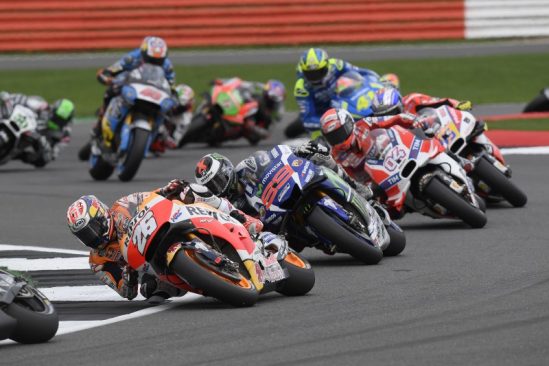 Marc Marquez and Dani Pedrosa took fourth and fifth place, respectively, in today’s British Grand Prix. As has been the case at many of this year’s GPs, the weekend was affected by mixed weather conditions, making tyre choice very difficult.

After the race was red-flagged on lap one due to a nasty crash involving Loris Baz and Pol Espargaro, Maverick Viñales took the lead on the restart while Marc slotted into second position, leading a group that included Valentino Rossi, Cal Crutchlow, Andrea Iannone and Pedrosa. After five laps Marc, Rossi, Crutchlow and Iannone started a long fight for the runner-up position, swapping places several times. Pedrosa, who had made a positive step forward with the setup of his RC213V, closely trailed them. 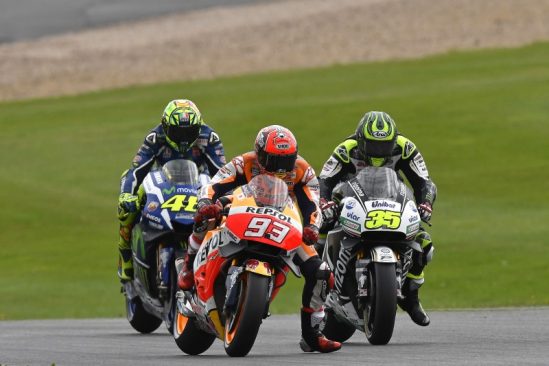 Iannone crashed out of the race on lap 13, leaving Crutchlow in second. Rossi and Marquez engaged in thrilling battle behind him, with the Repsol Honda rider eventually able to pull a gap and start chasing the Briton. The subsequent duel ended with Marc running wide at turn seven on the penultimate lap and re-joining the race in fifth, then overtaking Dani on the last lap to finish fourth.

The MotoGP paddock now heads to Misano for round 13 of the Championship, with Marc leading the standings on 210 points, 50 clear of Rossi and 64 ahead of Lorenzo. Dani is fifth with 120 points. Honda is actually also leading both the Constructor and Team World Championship Classifications. 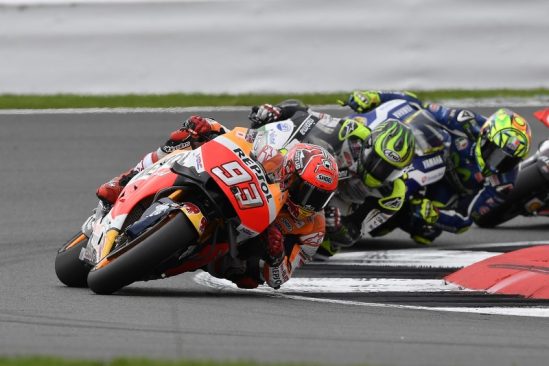 “Today was one of those difficult Sundays because there were many ways of approaching the race, with many options for both the front and rear tyres. Perhaps we got it wrong with the front, because we chose the soft tyre, but that was what we thought was best before the race. I realised the mistake once the race was underway, and from there I decided to make the most of the situation. It’s a pity that I went wide under braking when fighting for second place, but in the end we rectified the situation quite well. We finished fourth and only lost three points from our overall advantage, which is what matters to us.”

“Overall it was a challenging weekend because of the track conditions. It has always been cold, sometimes with rain included, and we’ve never had any sun. It was hard to get a good feel for the tyres because there was no rubber laid down on the asphalt. I chose the soft-soft combination and I knew that I would have some issues in the final laps, but all in all I think it was the best choice at the moment. The good news is we’ve taken a step forward in terms of results and have regained a little more confidence, especially entering the corners. There are still some things that we need to improve, but we had a decent race and set some more-reasonable times. We’ll try to take the positives from here and work on the rest for the next race.”