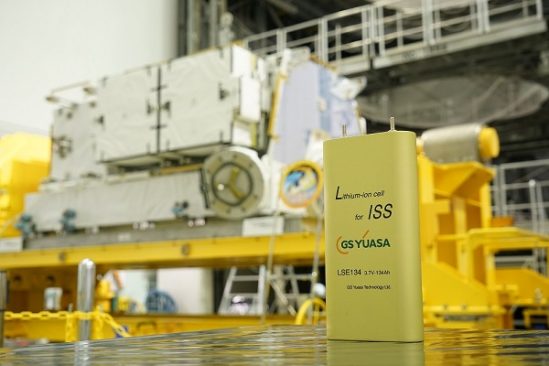 GS Yuasa Corporation has announced that its lithium-ion space cells have been adopted for use on board the International Space Station. The high-performance lithium–ion cells will be shipped to the ISS from December 2016 and will replace the space station’s current batteries.

The cells also have high energy density for their mass, which is about three times that of the cells currently installed on board the ISS. This means that just 24 of the new lithium cells will deliver the same performance provided by the 48 nickel-metal hydride batteries that are currently in use.

The new ISS cells will be delivered into orbit by the Japan Aerospace Exploration Agency in four batches by the H-II Transfer Vehicle “KOUNOTORI.”

GS Yuasa Technology Ltd develops, manufactures and distributes cells, batteries and power sources for special applications. It has supplied various high-performance, high-quality batteries for special environments such as deep sea submarines, land based industry and transportation, aviation and space satellites. In fact GS Yuasa batteries are used in locations ranging from depths of 6,500 meters below the ocean surface to 36,000 kilometres high in space.

Going forward, the GS Yuasa Group will continue to contribute to space development projects through the development and manufacturing of high performance lithium-ion batteries.

Long life
When considering full charge and complete discharge as one cycle, the cells can be used for more than 5,000 cycles