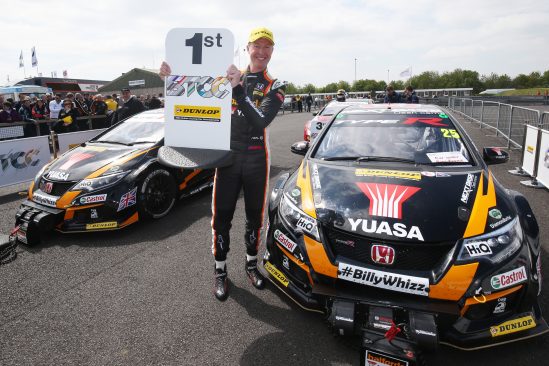 Halfords Yuasa Racing enjoyed a successful weekend on ‘home’ soil as the Dunlop MSA British Touring Car Championship sped into ultra-fast Thruxton, with Gordon Shedden outscoring all of his rivals on the same weekend that Matt Neal reached a major milestone.

In front of a host of Yuasa employees – with the battery manufacturer’s UK headquarters and distribution centres just up the road in Swindon – Neal and Shedden locked out the top two spots on the starting grid in qualifying, as the former snared his 16th BTCC pole position and the latter belied maximum ballast to join him at the sharp end of the field.

Neal converted that into his 60th career triumph in race one – in so doing drawing level with tin-top legend Andy Rouse in equal-second place on the all-time BTCC winners’ list. Shedden followed his Halfords Yuasa Racing team-mate home for the runner-up laurels, as Honda cars secured all three spots on the podium. 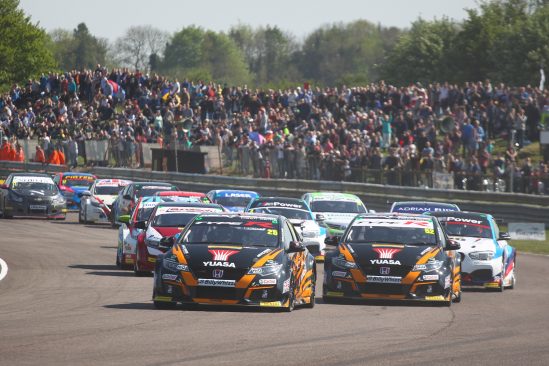 A similar result looked to be on the cards in race two as Neal led away again, until a power steering issue sent him darting for the pits at the end of lap two. Upon rejoining the fray, the three-time BTCC Champion posted what was comfortably the fastest lap to underline what might have been.

An early ‘moment’ on cold tyres saw Shedden shuffled back to fourth, but the Scot immediately fought back and was sizing up Rob Collard for the lead when the red flags flew once more – this time for good – on lap seven.

In the day’s finale, from fifth on the reversed grid, Shedden had to dig deep to unseat Rob Austin’s lighter Toyota from fourth position and complete his weekend with another very strong finish, while Neal took no prisoners as he scythed his way through from 29th to tenth at the chequered flag – although he was subsequently demoted to 11th after being adjudged to have gained an unfair advantage in overtaking a rival.

Shedden’s excellent haul saw him vault from fourth up to second in the Drivers’ standings – just 17 points adrift of the lead – with Neal similarly in contention in seventh. Honda has gained ground in the Manufacturers’ classification, as Halfords Yuasa Racing maintains second spot in the Teams’ Table. 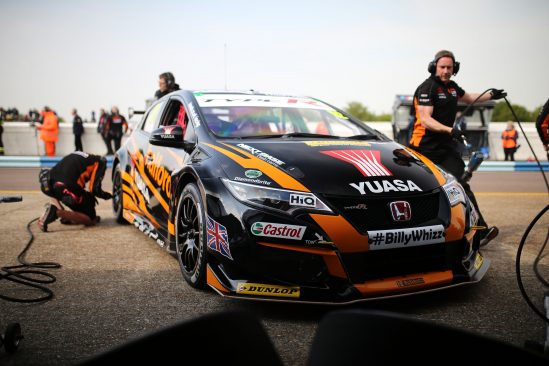 “To qualify on the front row with 75kg in the car definitely exceeded my expectations; every lap was an adventure as I tried to keep my foot in for as long as possible through the faster corners around the back of the circuit – there wasn’t much left in the tank! I got a slightly better start than Matt in race one, but he was a lot lighter than me so I didn’t force the issue too much. It was fantastic for him to take his 60th BTCC win, and a tremendous effort from the boys to get a one-two. It was disappointing that we didn’t have another five or six laps in race two because we were clearly quicker than Rob, and then race three was another good finish. You always want more of course, but we left with three very solid results and a strong points haul – and that gives us a lot of confidence going to Oulton Park.” 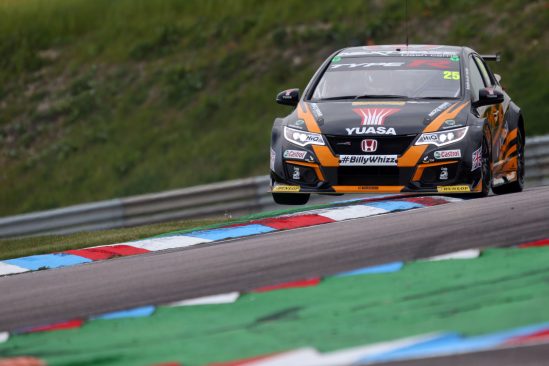 “After the disappointment of Donington, we needed to bounce back and I’m really going to cherish this 60th win. The Civic Type R has always been amazing at Thruxton – we work hard on the aero, and this circuit is primarily high-speed corners. ‘Flash’ certainly made me work for pole, and to come away with a Halfords Yuasa Racing one-two and a Honda podium lockout on home soil in the first race was a dream – a fabulous result to reward all the guys and girls from the factory who came down to support us. I felt a bit wounded after race two, because that was another win in the bag – ‘Flash’ and I could really have made hay out there – but the car was magnificent in race three. The team said to me, ‘why don’t you drop back and see if you can go for fastest lap’, but I thought ‘stuff that’ and had a lot of fun. I just wanted to keep going at the end…”