Yuasa would like to thank Gordon Shedden for his years of loyal service to Halfords Yuasa Racing in the Dunlop MSA British Touring Car Championship (BTCC), as the Scot departs for a new challenge ahead of the 2018 campaign.

Gordon first joined Honda in 2006, claiming ten victories and a best championship finish of third as he immediately made his mark in Britain’s premier motor sport series. He rejoined Honda in 2010 and since then he has gone on to claim 38 further race wins.

Yuasa first started sponsoring Honda Racing and Gordon in 2011 before becoming title sponsors in 2012. A hat-trick of Drivers’ crowns in 2012, 2015 and 2016 proved that Gordon is definitely one of the greats in BTCC. During this time, he also formed a formidable partnership with team-mate Matt Neal – himself a three-time BTCC Champion in Honda machinery.

Halfords Yuasa Racing is continuing its preparations for the 2018 season and will announce Gordon’s replacement in due course.

Gordon Shedden said: “Today is a really difficult and emotional day for me. I can confirm I will not be competing in the British Touring Car Championship in 2018, which obviously means I will not be racing with Honda, Team Dynamics and Halfords Yuasa Racing. They have been part of my life for the last 11 years and I have been made to feel a part of the family.

“Steve and Matt Neal gave me a chance in 2006, and we haven’t looked back since. From a Fiesta racer to a triple British Touring Car Champion, I could not have dreamed of the success we have achieved together. That success, along with Matt’s three championships, is a testament to the hard work, determination and passion that is intrinsic in the team. To Steve, Matt, [Technical Director] Barry Plowman and everyone at Team Dynamics I will be forever grateful, in particular my race engineer Eddie Hinckley, who has engineered my car since 2006!

“I am very lucky to have had such a successful partnership with the team, Honda, and all our sponsors including Yuasa.  We have been on a huge journey together, achieving multiple Teams’, Drivers’ and Manufacturers’ Championships. Along the way, we have had a lot of fun and created memories I will take and cherish forever. It may be the end of a chapter, but it won’t be the end of the friendships I have made.” 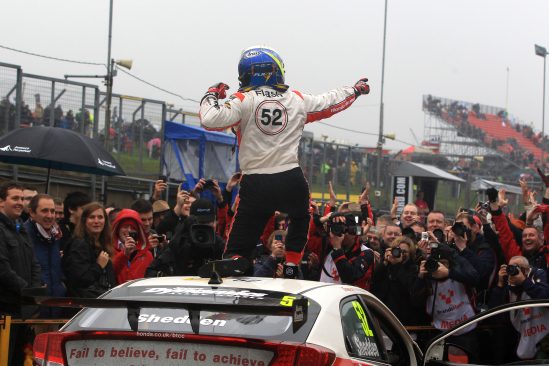 Andrew Taylor, Managing Director at GS Yuasa Europe said: “I would like to thank Gordon for the key role he has played in our BTCC successes over the past few years. Since becoming a major sponsor of Honda Racing in 2011 we have enjoyed unprecedented success with Gordon and the team.

Flash has made a tremendous contribution, not only winning three Drivers’ titles but also helping to secure five Manufacturers’ crowns and six Teams’ trophies, which is an outstanding accomplishment by any measure. His 48 career victories place him fourth on the all-time list. We are immensely proud that he achieved every single one of his Drivers’ crowns in Yuasa backed cars. I wish Gordon all the best in his future career.”

Matt Neal added: “Gordon is a part of our family and success story. He’s got a new and exciting opportunity and we would never hold him back from that. We wish him the very best of success in his new challenge – he’s a phenomenal competitor and he’s certainly talented enough! One thing is for sure – despite ‘Flash’ racing elsewhere this season, he’ll always remain part of our Dynamics family and part of our team.”