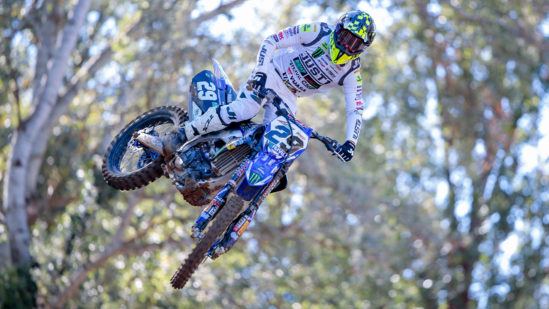 A weekend to be framed in Faenza for Yuasa sponsored Team SM Action Yamaha. At the GP of Italy, Renaux conquered his first Pole Position, he dominated Race 2 and he won the first GP of his career in MX2. Jacobi gained points only in Race 2.

After a little summer break, the first weekend of September saw riders and teams of the FIM Motocross World Championship going back to the track to take part to the sixth round of the calendar, the first out of three in a row that will also include a midweek GP. The circuit designed for those three rounds is the “Monte Coralli” of Faenza (Ravenna), a traditional track located on Romagna’s hills with a hard and clayey surface.

Team SM Action Yamaha deployed the German Henry Jacobi #29 in the MXGP and the French Maxime Renaux #959 in the MX2.

The new format of the GPs, practices and races take place all on Sunday. In the quarter-of-litre class Maxime was really fast straight away and after the 3rd place in Free Practice he made it to his first Pole Position of his career, taking an advantage of six tenth-of-a-second from the rider in 2nd place. In the Top Class, Henry finished 9th in Free Practice but he was not able to make it better than the 20th place in Qualifying.

In the late morning the riders of MX2 went on track for Race 1. Maxime had a good start and after the first corner he was next to the Top 5. Rapidly, during lap 1, Renaux moved up a few places and he crossed the finish line in 3rd place. For the whole first part of the race Maxime stayed steadily in 3rd place but during lap 8 he took advantage of a mistake made by the leader and he moved up to the 2nd. In the rest of the race he managed authoritatively the gap from the rest of the riders and after 17 laps he finished in 2nd position. 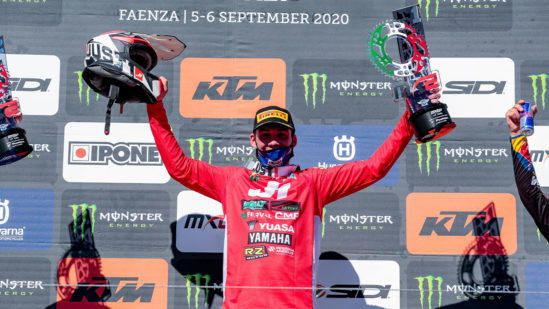 In Race 2 Maxime was determined to win and he showed his wish straight away, as he took the lead of the race after a few corners only. He signed fastest lap after fastest lap and he accumulated a good gap, which he managed until the last part of the race. When there were a few laps to go he resisted from the pressing of the leader of the General Classification and he crossed the line in 1st place, winning the first race and the first GP of his career. This victory allowed Maxime Renaux to consolidate the 3rd place in the General Classification of the Championship.

In the MXGP class, Race 1 was not that easy for Henry. He started in the Top 20, but the German did not find the right speed on the up and downs of the technical circuit of Faenza. During the first half of the race his performance was steady, but then he went down a little and he consequently lost a few places, finishing 21st and out of the points-area. In Race 2 he had a better start. For a long part of the race Henry stayed in the Top 10 in 8th place but, like in the previous one, he had a physical down and he moved back some places, finishing in 14th. At the end of the day he was ranked in 18th position and he moved up one place in General Classification as he is now 19th.

On Wednesday the 9th of September will take place the MXGP of Città di Faenza, while on Sunday the 13th there will be the last of three races in a row in Italy which will be the MXGP of Emilia Romagna.

Maxime Renaux # 959: “Today the race went very well, with a 1st time in timed practice. In race 1 I started among the first and finished 2nd while in race 2 I started from the front and drove in the lead right under the checkered flag. It was long, it seemed to never end, but I’m happy with how I managed the pressure. Now I can’t wait to get back on track to repeat myself. See you soon.”