GS Yuasa, the world’s leading battery manufacturer, have announced a partnership with Bridgend-based Infinite Renewables Group. The partnership serves to offer cheaper and greener electricity through the combination of renewable energy generation and battery storage technology, creating local energy centres in industrial areas throughout West Wales and the Valleys.

The Generation Storage Consumption Supply (GSCS) project is part funded by the European Regional Development Fund, through the Welsh Government, and is a collaboration between Infinite Renewables Group, GS Yuasa and Albion Community Power LP, a fund managed by Albion Capital. The project aims to utilise a combination of low carbon and green energy solutions, such as wind turbines, solar PV and combined heat and power. These technologies are to be integrated with GS Yuasa’s proven dual-chemistry battery system, reducing electricity costs and the environmental impact associated with traditional forms of energy generation.

GSCS have developed a state-of-the-art dual chemical energy storage solution housed within shipping containers. These first of their kind systems combine Yuasa’s industry-leading lead acid batteries with GS Yuasa’s cutting-edge Lithium-ion battery technology to store and deploy green locally generated energy as and when necessary. Both unique and self-contained, the systems are designed to be easily integrated into any renewable energy micro-grid configuration. 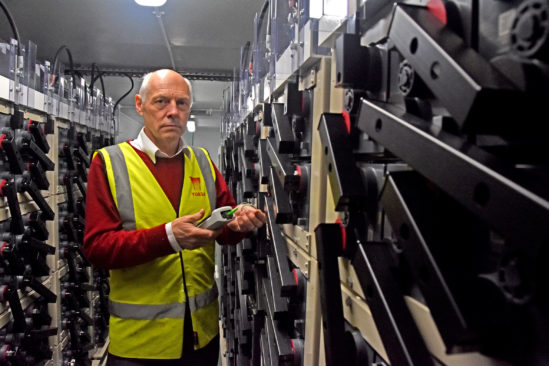 The announcement comes following the successful installation of a concept container, pictured above, at GS Yuasa’s factory in Ebbw Vale, South Wales early last year. The system stores energy generated by renewable sources to support the factory’s production capability of over 850,000 batteries a year.

A total of seven schemes are planned, the first of which involves the installation of 2,900 solar panels at GS Yuasa’s Ebbw Vale factory. Around 5% of the energy needed to support the factory’s production will be generated from the solar panels, the installation is expected to begin shortly.

“It’s fantastic news for the Ebbw Vale factory too which was at the centre of increased production earlier in the year to fulfil orders in response to COVID-19. The Welsh factory produced thousands of batteries for use in critical infrastructure nationwide including the NHS Nightingale hospitals.”