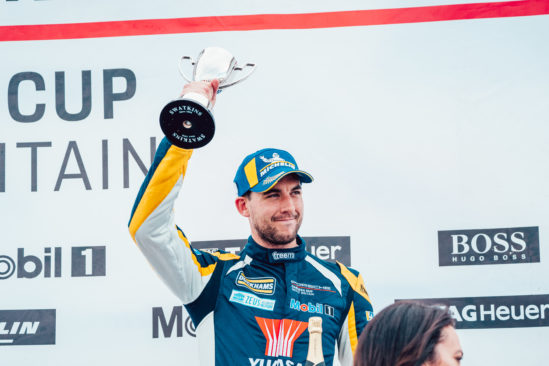 Yuasa driver Dan Cammish had another successful weekend in the Porsche Carrera Cup GB as he increased his lead atop the championship standings with a pair of podium finishes at Donington Park.

With just four races left to run in the 2021 campaign coming into the Leicestershire venue, the Yuasa backed racer knew every point would be key, especially if he could outscore his main rival, Lorcan Hanafin.

The Yorkshireman was reflective after Saturday’s qualifying session lining up fourth on the grid but feeling he had extracted every bit of performance from his Redline Racing Porsche 911 GT3 Cup machine.

Dan made a good start to the opening race on Sunday and held fourth position during the opening laps before looking to pass Kiern Jewiss. While he found his way blocked at Redgate, Dan kept the momentum and, after forcing his rival to go defensive onto the back straight, got a better run and moved ahead into the chicane, claiming third.

He then turned the tables on Hanafin after their battle at Silverstone, putting him under pressure and was handed second position when a five second track limit penalty was handed to Hanafin, promoting Dan to second and earning him a good haul of points in the process.

After the partially reversed grid draw put him fourth on the grid for race two, Dan got a good launch off the line and was challenging Hanafin for third but was shuffled wide and fell to fifth behind Harry King. He then claimed fourth from King who himself was run wide, before taking third from Hanafin with a bold, brave pass.

With his main title rival then falling to fifth behind King, Dan was in a good position points-wise, though kept the pressure on Josh Malin ahead, but opted not to risk contact in the closing stages, holding third and extending his lead in the standings.

“Qualifying was as fast as I could go. That was it. I’ve always felt that if you can get out of the car and look yourself in the mirror and say, ‘is that the best I could do?’ and you can say ‘yes,’ then who can say fairer than that? I know that it was the best I could do that day – I could not drive that car any quicker than it wanted to go with me in it.

“It’s not as easy as I remember this championship, it never was easy but I’m certainly doing it the hard way at the moment, keeping the points rolling in. We’re not off in the distance winning races but we’re fighting, battling for every point we can earn, and points mean prizes. It’s been a good day to qualify fourth and to come away with a second and third can only be deemed as a good result. I twice beating my championship rival which was really good because it’s really hard to score the points these days.

“I think if I have had a chance at getting to the lead I think we could have won a race. We were very fast on the track over the course of a race distance so now I’m very happy. The car has been really good, and we go to Brands GP where there’s much less testing. I’ve got a lot of experience there and I’m very good there – it’s certainly one of the tracks that I excel at, so I’m hoping we can go and have a great weekend.”