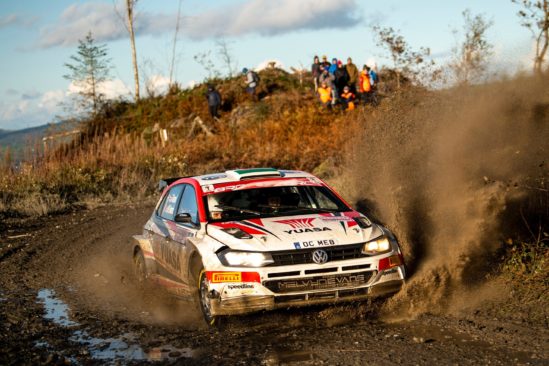 Heavy rain had made the North Wales forests extremely wet and slippery, but despite a relatively good run through the opening Gwydir stage Matt found himself in second place, 10.4 seconds behind his Melvyn Evans Motorsport stablemate and title rival Osian Pryce.

They shared equal fastest time in Penmachno (SS2) before Matt and co-driver Darren Garrod set fastest time in Alwen (SS3) to reduce the gap to 6.2 seconds as they arrived at Llandrillo College in Rhos-On-Sea for first service.

Matt made a few set-up changes to his Yuasa Battery, TPS and Swift Group-backed Polo R5 for an attack over the afternoon stages – which included a repeat of the morning’s three gravel stages plus a new Twin Lakes asphalt test.

However, near the start of Gwydir 2 the car hit a bump in the road and whilst it caused no issues whatsoever in the morning this time it launched the car off the road and into a bank, breaking a compression strut and pushing the front right wheel back into the wheel arch. 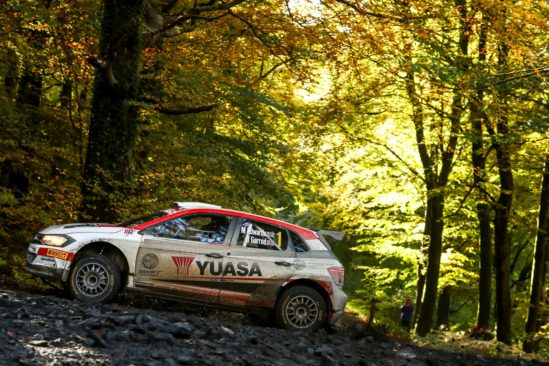 Matt had lost 1 minute 40 seconds by the time he’d limped to the end of the stage, where it was feared that his rally was over. And with bonus BRC Joker points at stake, retirement would have ended his title challenge.

Yet in a characteristic never give up effort, Matt managed to make emergency repairs and miraculously nursed the car through the remaining three stages to reach the finish on Llandudno promenade in sixth position overall. It was a long way from the victory he’d hoped for, but more importantly he had finished third in the BRC category which added to his three Joker bonus points helped him to close the gap to just eight points (after dropping one score from six rallies, with a final tally of five scores from seven rallies to count) in the series.

“Whilst I feel lucky to have got the car back to the finish of the Cambrian Rally, my overriding emotion is of huge disappointment,” said Matt.

“We made a few changes to the car’s set-up in service after the morning loop of stages and I was happy to commit one hundred per cent to those changes. But we never got the chance to find out if those changes would have worked because just three corners into Gwydir we hit a bump that threw us across the road.

“It was the second time through that stage and it wasn’t a section of road that we’d even considered would do that to the car. But it launched us across the road and into a little bank which broke a compression strut.

“It was fifty-fifty as to whether we’d park it up after that because the chances of us getting through Penmachno the way it looked was slim. But I never give up and just strapped it up the best I could and persevered.

“From that moment on it was in the back of my mind that if the straps break it would instantly turf us off into the trees without any warning whatsoever. We’d slowed, but we were still pulling eighty or ninety miles an hour in places.

“It’s incredible that we were able to reach the end of the rally and finish third in the BRC. These points won here have kept our title hopes alive and now it’s all to play for on the final round.”

The final round of the 2021 British Rally Championship is the Today’s Ulster Rally on Saturday 20 November.