Yuasa’s world leading motorcycle and industrial AGM (absorbent glass mat) technology comes to the automotive market. The Yuasa automotive AGM battery has been engineered to meet the growing extreme power demands of recently introduced vehicles now starting to enter the European aftermarket. Yuasa’s automotive AGM experience comes from vehicles such as the Mazda MX5 and the famous Toyota Prius and has now been launched for European vehicle battery designs.

The AGM batteries utilises the same absorbent glass mat technology as used in Yuasa Motorcycle and Industrial batteries which have been on the market for over 44 years (1965). This absorbent glass mat absorbs the battery’s acid, enabling a more efficient use of the cell’s volume without the need for electrolyte reservoirs, as needed with conventional flooded batteries. The absorbent glass mat gives a number of key benefits to the design of the lead acid battery:

Q. What are the differences between flooded and AGM Lead Acid batteries?
A. See above, AGM batteries are built using a glass mat separator which enable all the electrolyte required by the battery to be stored within the glass mat, also allowing any gasses given off during charging to be recombined into water meaning that the batteries are totally maintenance free. The design benefits of the glass mat over conventional flooded batteries enable the battery pack to operate under higher pressure without the fear of insufficient electrolyte between the plates, leading to the step change in durability offered by AGM batteries over flooded. The quality of the glass mat is a critical item in ensuring the optimum life of the battery versus its application. This experience has been gained by Yuasa from over 44 years experience in the field using this technology. The automotive application battery designs are balanced with greater high rate starting performance and cycle life for the increased service/technological requirements of modern vehicle designs.

Q. What are the differences between GEL and AGM (starved) batteries?
A. Both are recombinant batteries (i.e. under normal operating conditions they recombine the gases given off during charging to form water) and both are classified as sealed valve regulated.

The major difference is that in the AGM, the electrolyte is fully soaked into a special absorbed glass mat separator which immobilises the acid, whereas in the GEL batteries the acid is mixed with Silica to form a GEL also immobilising the acid. The benefits of AGM over GEL are that with the use of absorbed glass mat, the battery pack can be operated under a greater operating pressure so improving cyclic durability. With GEL, similar pack pressure can not be used so durability is usually provided by increased paste density which is good for life but not as good for high rate startability performance as required for automotive applications.

Q. Why is charging voltage so critical to both GEL and AGM batteries?
A. Charge voltage is critical with these types of batteries as both are recombinant batteries. This means that the oxygen that is normally produced on the positive plate in all lead acid batteries recombines with hydrogen given off by the negative plate. The recombination of the hydrogen and oxygen produces water, which recycles back to the battery acid, therefore the battery is maintenance free and does not need topping up.

The sealing vent used in the design ensures that a positive internal pressure is maintained to ensure the recombination of the gasses occur and not allow the cell ?to dry out and fail.

In addition, the valve must safely release any excess pressure that may be produced during overcharging ?(e.g. alternator rectifier fault), otherwise the cell would be irreversibly damaged. The excessive pressure that the valve is releasing is both hydrogen and oxygen which can not recombined within the battery so breaks the cycle, ?net result is that battery would eventually dry out.

It must be noted that an AGM battery must never be opened once it leaves the factory, as sulphation could occur on the plates leading to an irreversible loss in performance.

Gel batteries are more critical to correct charging as overcharge can lead to the gel being irreversibly damaged, AGM are not subject to this failure mode and hence are more suitable for automotive use.

Q. Can I store my AGM battery in my garage during the winter or will it freeze?
A. As with flooded batteries, providing the batteries are kept ?in a charged state, batteries can be stored without any fears of freezing.

Q. Can I store my AGM battery on the garage floor?
A. Many people have the impression that when batteries sit on concrete the energy “leaks out”, the truth is that you can let any modern battery sit on concrete without fear of harm or accelerated self discharge.

This myth stems from the days of the old wooden/glass case batteries, where damp floors led to water soaking up into outer wooden cases causing swelling of the wood. In fact with modern batteries in hard plastic cases, concrete is generally an excellent surface on which to store a battery. The key issue is that the floor should not have any sharp objects which may damage the battery casing; there are no electrochemical reasons.

Q. Do AGM batteries have a memory?
A. No, this is only a function of Nickel Alkaline Battery system such as Nickel cadmium. 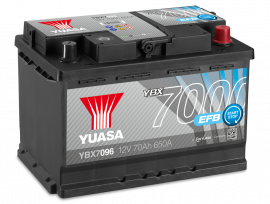 Improved flooded battery technology, increasingly referred to as EFB technology in the market, offers a cost effective solution for entry level Start-Stop vehicles. EU emissions targets for these vehicles are lower than those set for higher performance models. This has led to manufacturers developing a battery technology that meets the demands of Start-Stop operation in a higher state of charge than expected from AGM technology, but lower than that expected from standard wet-flooded starter batteries.

To meet the growing demand for OEM specification EFB technology in the European aftermarket, Yuasa has introduced 11 new EFB battery types with the launch of the YBX7000 Start Stop range. This range comprises 5 European (DIN) and 6 Japanese (JIS) battery sizes to maximise coverage of vehicles in the UK parc.

In addition to Start-Stop, Yuasa EFB batteries are well suited to use in demanding applications. In repetitive deep discharge scenarios, such as those common to Police vehicles and Taxis, EFB technology offers improved cyclic durability, when compared to premium wet-flooded batteries.

Q. What are the differences between standard flooded and EFB batteries?
A. EFB batteries are an enhanced version of standard wet-flooded technology. The primary benefits of EFB technology are improved charge acceptance and greater cyclic durability when operating in a reduced state of charge (typical of Stop Start applications). As an approximation, EFB batteries will provide 270,000 engine starts, compared to 30,000 starts from standard flooded product.

Q. What are the differences between EFB and AGM batteries?
A. EFB batteries have been introduced as a lower tier option to AGM batteries in terms of performance and durability. EFB technology relies on improvements to existing flooded technology through the addition of Carbon additives in the plate manufacturing process. AGM batteries benefit from the inclusion of unique design features not found in wet-flooded batteries. These include glass mat separators, recombinant lid technology and higher pack pressures to facilitate improved cyclic lifespan. AGM batteries are better suited to meeting the demands of higher specification vehicles that include one or more of the following technologies: Start Stop, Regenerative Braking and Passive Boost.

Q. Can I store my EFB battery in my garage over winter or will it freeze?
A. Providing that the battery is kept in a charged state, it can be stored without any fears of freezing.

Q. Can I store my EFB battery on a garage floor?
A. You can let any modern battery sit on concrete without fear of harm or accelerated self-discharge. Concrete is generally an excellent surface on which to store a battery. The key issue is that the floor should not have any sharp objects which ?may damage the battery casing; there are no ?electrochemical reasons.

Q. Do EFB batteries have a memory?
No, this is only a function of Nickel Alkaline Battery systems such as Nickel cadmium.