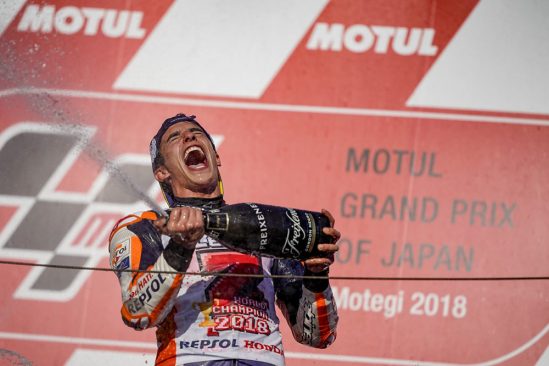 Yuasa are celebrating with Marc Marquez and the HRC Repsol Honda MotoGP team after the sensational Spaniard won his fifth MotoGP World Championship in six years. A brilliant victory at the Grand Prix of Japan this weekend saw Marquez make yet more history by becoming the youngest rider in the history of the sport to win five premier class world titles, smashing a host of other records along the way.

Yuasa has been a team sponsor of HRC Repsol Honda since Marquez made his MotoGP debut in 2013, having already won the 125cc and Moto2 World Championships. The battery manufacturer has since helped to power him to over 43 MotoGP race wins and 76 podium finishes.

Marquez tied up this year’s championship with his eighth win of 2018 after starting from sixth on the grid. Marc immediately recovered to second place at the start before a race-long battle with title contender Andrea Dovizioso and Cal Crutchlow. With two laps remaining, the Dovizioso crashed out of the race, just after Marc had passed him in preparation for a last-lap duel. 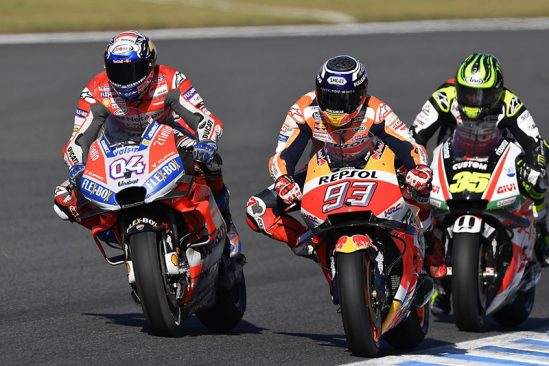 As an Original Equipment Manufacturer (OEM) and motorcycle battery supplier to all the world’s top bike brands, Yuasa are the number one choice for quality, reliability and performance.

James Douglas, Marketing and Product Manager for GS Yuasa Battery Sales UK Ltd. Said: “We’re absolutely delighted that Marquez has claimed his fifth MotoGP World championship title in such dominant style. He is undoubtably one of the sport’s greats, and his achievements at such a young age prove he is one of motorcycle racing’s all-time greats.”

“We are delighted to be able to share in the success of Marc Marquez and the team. We can’t wait to see what more they can go on to achieve in the future.” 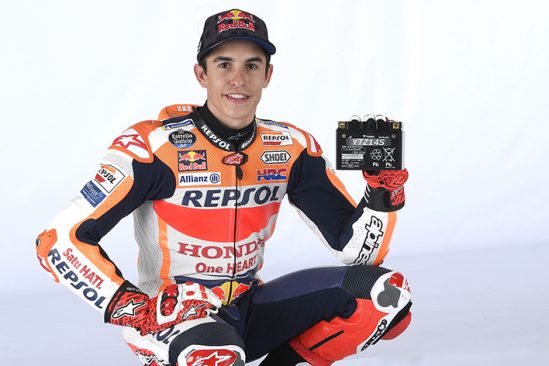 – At the age of 25 years and 246 days, Marquez is the youngest rider of all time to reach the milestone of seven World Championships, taking the record from Mike Hailwood, who was 26 years and 140 days old when he won his seventh title, the 1966 350cc crown.

– Marquez is one of only eight riders to have taken seven or more World Championships across all classes, the others being John Surtees (7), Phil Read (7), Carlo Ubbiali (9), Mike Hailwood (9), Valentino Rossi (9), Angel Nieto (13) and Giacomo Agostini (15).

– Marquez has joined Mick Doohan, Valentino Rossi and Giacomo Agostini as one of only four riders to have taken five or more premier–class titles.

– Marquez has won all his MotoGP titles while riding Honda motorcycles, joining Mick Doohan as the riders with the most premier-class crowns with the Japanese manufacturer (5).

– Only one Spanish rider has won more world titles than Marquez: Angel Nieto, who earned 13 World Championships (seven in the 125cc class and six in the 50cc class) between 1969 and 1984.

– Marquez has won at least five GPs per season over the past nine years, across three categories: 125cc, Moto2 and MotoGP. He is the first rider to achieve this distinction in the 70-year history of motorcycle Grand Prix racing, beating his own record from last year. Previously, Mike Hailwood was the only man to have achieved at least five victories per season over seven years (1961-1967), and across at least three classes.

– Marquez’s current 2018 tally of five pole positions extends his all-time pole record (in the modern era—since 1974, when full poles began to be officially recorded) to an incredible 78 poles across three classes.

– Marquez has won more MotoGP races this season than any other rider (8). He has also scored the most podiums (13) and the most pole positions (5).