Yuasa gear up for the return of BTCC 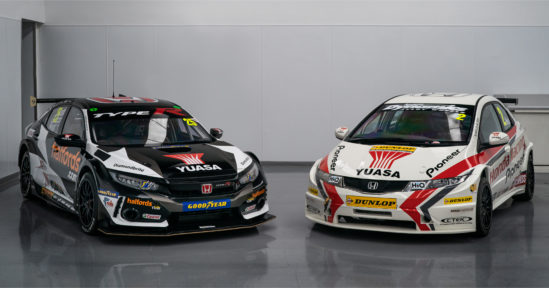 Yuasa are revving up for the much-anticipated return of the British Touring Car Championship (BTCC) at Donington Park next weekend (1 – 2 August). After a much-anticipated wait, the two Halfords Yuasa Racing cars will take to the track in anger as the 2020 season finally gets underway.

When the lights go out on Sunday 2 August, it will be 282 days since the BTCC grid raced at the season finale at Brands Hatch last October. The 2020 championship was due to kick off on 29 March, but due to the global situation there was no other option than to put the season on hold.

Although delayed, the 2020 season marks the ten-year anniversary for Yuasa in the prestigious BTCC and with Team Dynamics, having first become sponsors in 2010. The battery brand, manufactured by GS Yuasa, unveiled the Honda Civic Type R FK8 back in March, alongside the championship winning Civic FN2 from 2011, a nod to their successes over the last ten years.

Despite not competing in any race events so far, the new FK8 challenger has completed successful test days in preparation for the delayed season opener. Both cars feature a fresh new livery featuring Yuasa’s distinctive branding alongside matte elements for the first time. To commemorate the battery manufacturer’s decennary, a special 10-year anniversary logo is also featured on the car’s side.

The Civic’s will be piloted by three-time champion Matt Neal and Dan Cammish. 2020 also marks Matt’s record-breaking 30th year in the championship. In that time, he has secured 63 race wins and 3 drivers’ championships.

The Droitwich-based team hope to build on the Honda Civic FK8’s successes over the last two seasons. The Team Dynamics-run Halfords Yuasa Racing team scored podiums at 18 races in 2019, securing the team’s championship, but narrowly missed out on becoming drivers’ champions at an action-packed season finale at Brands Hatch. 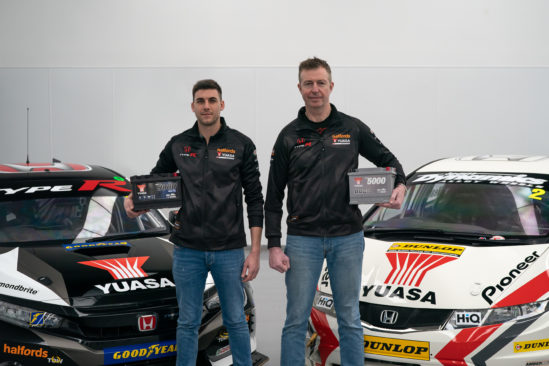 James Hylton, Managing Director at GS Yuasa Battery Sales UK Ltd said: “We’re proud to continue our partnership with Halfords Yuasa Racing, especially as we celebrate ten years in the championship and look forward to our 11th season. It will certainly be one to remember!

“Yuasa’s performance on track over the last ten years have strongly reflected our core values of quality, reliability and performance. Both Matt and Dan have provided some incredible results and we’re very much looking forward to watching them finally go racing at Donington Park.”

Matt Neal, Halfords Yuasa Racing Driver added: “Not only have Yuasa been our longest serving sponsorship partner, but they have truly embraced the meaning of the partnership from our humble beginnings together back in 2010.

“I cannot thank them enough for the help and support they have given the team and I over the years, through the good times and the bad, they have stood by our side. I am very proud to be associated with the Yuasa brand and the great team of people that are behind it and its products.”

This season is still planning on going ahead as a 30-round championship, starting at Donington Park next weekend and ending at Brands Hatch on 14 – 15 November.