Defending champions VisionTrack Ducati saw 2020 riders Josh Brookes and Christian Iddon have an eventful day at the opening round of the Bennetts British Superbike Championship at Donington Park with a fourth place for Iddon the best they had to show for their efforts, which undoubtedly deserved more.

After claiming a podium in yesterday’s opening race of the season aboard the Yuasa sponsored VisionTrack Ducati Panigale V4 R for Paul Bird’s Cumbrian team, Brookes had been on course for a second podium finish in the final race of the weekend before a collision with Andrew Irwin resulted in a high-speed crash fortunately without injury to the Australian.

Earlier in the day, the opening 26-lap race started well as pole setter Brookes grabbed the lead off the line and although he was soon overhauled by Glenn Irwin, he was looking comfortable in second with Iddon one place further back in third having made a strong start from the second row.

2015 champion Brookes was forced wide on lap five and dropped back to sixth place and by half race distance, he’d dropped to tenth which left Iddon to fly the flag towards the head of the field as he slotted into third place behind the Hondas of the two Irwin brothers.

However, as the race entered its final third he too ran into trouble and fell back, eventually finishing in eighth place, two places behind Brookes who recovered some ground in the second half of the race to take sixth.

The second 26-lap encounter saw Ducati rider Tommy Bridewell disappear into the distance, never to be headed, but both Josh and Christian were in the hunt for a podium position for much of the race.

Indeed, both riders ran inside the top three at one stage and Brookes occupied second place for 15 laps before Glenn Irwin pushed him back to third on the 23rd lap. Moments later, Andrew Irwin attempted to overtake Brookes as they headed towards Craner Curves but as he did, the two riders touched, and last season’s runner-up Brookes crashed out at 130mph.

However, race stewards later disqualified Andrew Irwin for unfair contact which contributed to Brookes’ crash meaning Iddon, who crossed the line in fifth was elevated to fourth place, his second of the weekend.

The championship table sees Iddon in fifth place with Brookes in seventh as they head to the second round at Snetterton in two weeks’ time. 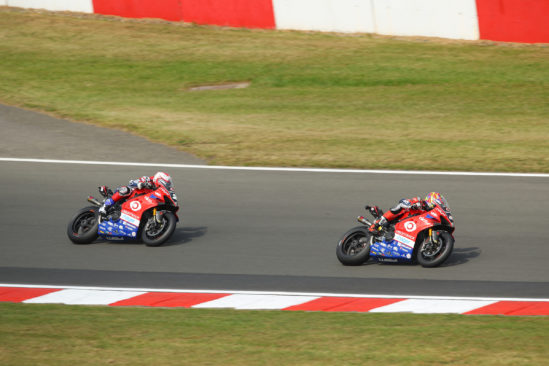 Josh Brookes:   “What can I say? Despite a podium, I wasn’t happy with the bike in race one, so we made some changes overnight. They really didn’t make a lot of difference in today’s opening race and I ended up making a couple of silly mistakes, so I’ll take the blame for that one. We had to change the bike again for the third race and that worked as we were competitive and had I got a better start; I think I could have gone with Tommy. And then I encountered the situation with Irwin. Glenn got past me fine, but Andrew touched me as he went past and down I went. These things happen so we move on and hope for better results at Snetterton.”

Christian Iddon:  “It’s been a big learning curve for me this weekend. Race one yesterday felt good and I was happy enough but in today’s opening race, I really struggled, especially in the last third of the race. The final race was better, and I was able to maintain a good pace. I was closing in on the leaders, but I made a minor mistake which let a couple of others past. From then onwards, I fell away and couldn’t manage a final push for the podium. Two fourths and an eighth isn’t what I want but we can work with those results. It’s three finishes, loads of data and no crashes so there’s room for improvement and my feeling with the bike is brilliant until the late stages of the race, so we just need to work on that and we’ll be somewhere near.”

Johnny Mowatt, Team Co-Ordinator:  “It’s been a disappointing weekend and we intend to look at where we need to improve before the next round. It was great to see Josh get a podium yesterday, but we struggled today, not helped by another rider causing him to crash at high speed. Luckily, he’s not injured but disappointing all the same that it happened. Christian continued to get to grips with the bike and with a pair of fourth place finishes, he was unlucky to miss out on a podium. Our aim is to bounce back at Snetterton so that’s our focus now.”

The next round takes place in two weeks’ time at Snetterton, Norfolk on August 21-23.