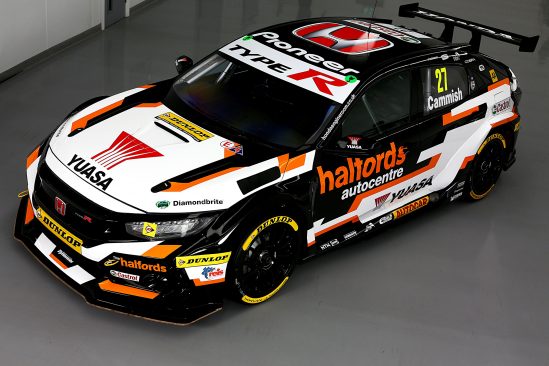 GS Yuasa Battery Sales UK Ltd are looking forward to another successful season in the Kwik Fit MSA British Touring Car Championship as a new look Halfords Yuasa Racing livery was unveiled today. The launch marks the start of Yuasa’s ninth consecutive season backing the team as they hunt for more silverware in 2019.

The Honda Civic Type R racing cars were unveiled at a special partners day held at the Team Dynamic, who run the Halfords Yuasa Racing operation, headquarters in Droitwich with the BTCC media day just weeks away. The machines carry an aggressive, all-new black and white livery with Yuasa red and Halfords Orange elements. The familiar Yuasa logos remains prominently on the bonnet, sides, wing mirrors and rear bumper of the cars.

Triple BTCC champion Matt Neal, now in his 28th BTCC season, and Dan Cammish, who is now entering his second year in the series will pilot the cars in anger with the first race taking place at Brands Hatch on Sunday 7 April.

Halfords Yuasa Racing is targeting ‘Championship titles’ after finishing a creditable second with new Civic Type R FK8 racing cars in the 2018 Manufacturers and Teams championships. Now, with the experience of a full season’s racing and winter development of the cars under their belt, the team expects to see the Hondas at the sharp end of the grid throughout 2019.

Yuasa has a long and proud heritage in BTCC racing, having been title sponsor of the Honda works BTCC team since 2011. During this time the battery manufacturer has enjoyed phenomenal success on the track, claiming an unprecedented four manufacturers titles and four drivers’ championships. 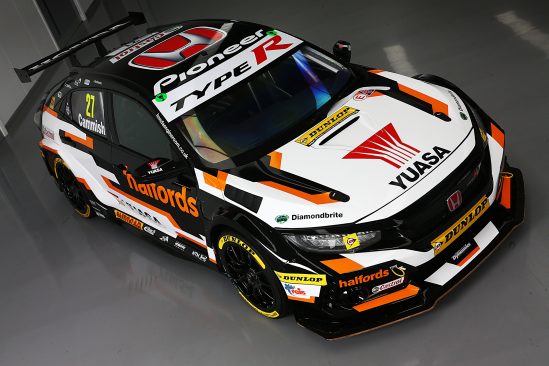 James Hylton, Managing Director of GS Yuasa Battery Sales UK Ltd said: “We are proud to continue our partnership with Halfords Yuasa Racing for another year and looking forward to more high-octane racing action during 2019.

“Our successful journey with Honda and the British Touring Car Championship in general continues to bring real benefits by raising the profile of our brand. Yuasa are the UK’s number one choice for automotive and motorcycle batteries and our performances on track over recent years have strongly reflected our core values of quality, reliability and performance.

“The car’s brand-new livery looks fantastic, it will really stand on the grid. Its launch has captured everyone’s attention, and it is already proving very popular. We wish Matt, Dan and the team all the best for the new season and we can’t wait to join them in celebrating more success on track.”

The team will continue development and testing in preparation for the season opener at Brands Hatch. The 30-round BTCC series then travels across the UK over 10 weekends taking in legendary circuits including Silverstone and Donington Park before returning to Brands Hatch for the season finale in October.