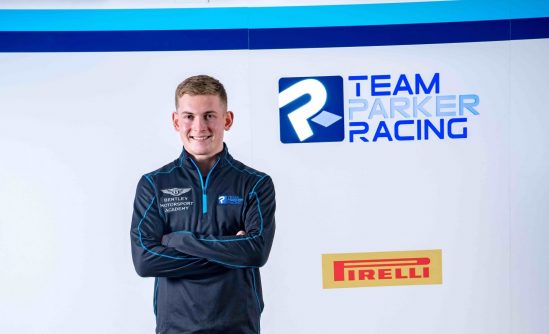 Frank Bird joins Nicolai Kjærgaard and Euan McKay to complete the recently announced line up. The trio are the first-ever members of the Bentley Motorsport Academy and will pilot a Team Parker Racing-entered Bentley Continental GT3 in the GT World Challenge Europe.

Despite being announced less than a week ago, the trio have already begun preparing for the series’ upcoming test days at Paul Ricard in France on March 12-13 with the opening round of the season taking place at Monza in Italy one month later. The season, which includes the prestigious 24 Hours of Spa, ends at the Nürburgring in Germany in September.

Closer to home, Frank, son of former rally driver and British Superbike team owner Paul, continues to lead the Motorsport News Circuit Rally Championship. The Penrith-born driver has proved almost unstoppable after winning four of the five rounds – the latest of which by over a minute at Cadwell Park in his Yuasa-backed Ford Focus.

The battery manufacturer’s support comes following their announcement of their sponsorship of reigning Bennetts British Superbike champions, Paul Bird Motorsport for the 2020 season. As part of the sponsorship, Yuasa branding will be evident in the team’s four-wheeled activities, building on the brand’s already strong presence in British motorsport.

Jon Pritchard, General Manager – Sales and Marketing at GS Yuasa Battery Sales UK Ltd said: “We’re delighted Frank has been chosen to join the Bentley Motorsport Academy. We’ve certainly been impressed with Frank’s reliable performance over the season so far and wish him all the best for his GT debut.”

The next round of the Motorsport News Circuit Rally Championship is at Snetterton on 15 February. Frank, Nicolai and Euan will take to the wheel of the Bentley Continental GT3 at the opening round of the GT World Challenge Europe at Monza on 17 April.